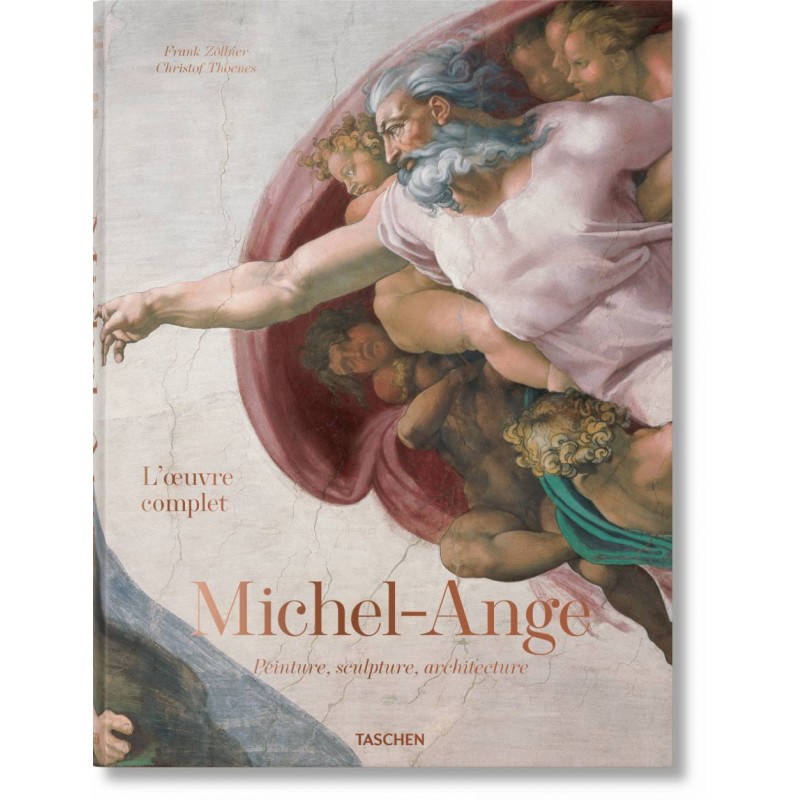 Before reaching the young age of 30, Michelangelo Buonarroti (1475-1564) had already sculpted the Pietà and David, two of the most famous works in the history of art. As a sculptor, but also as a painter, draughtsman and architect, the creations of this absolute master of the Renaissance are unique: no other artist before or after him produced work of such scope and diversity.

This new TASCHEN publication traces Michelangelo's rise to the highest cultural echelons of the Renaissance. Ten richly illustrated chapters cover the artist's paintings, sculptures, and architectural creations, with particular attention to the artistic tour de force that is the Sistine Chapel frescoes. Full-page reproductions and enlarged details allow the reader to appreciate the subtleties of the master's repertoire, while the biographical essay addresses the more personal traits and facts of his life, such as his solitary nature, his thirst for money and commissions, his immense wealth, and his talents as a land investor.

Frank Zöllner wrote his postgraduate thesis on an ancient motif in medieval and Renaissance art and architecture theory (1987), and his state doctoral thesis on Leonardo da Vinci's movement studies (published in 2010). He is the author of numerous publications on Renaissance art and art theory and on twentieth-century art. Since 1996 he has held a chair in medieval and modern art history at the University of Leipzig. He is the author of the monumental monographs Leonardo da Vinci and Michelangelo.

Christof Thoenes (1928-2018) studied art history in Berlin and Pavia, before taking his doctorate in Berlin. An honorary professor in Hamburg, Thoenes worked for several years at the Bibliotheca Hertziana (Max-Planck-Institut) in Rome. He has contributed to numerous publications on Italian art, especially on architecture and architectural theory from the 15th to the 18th century.